When talking about Japan with people who also love Japan, I often find that the conversation goes in the direction of “Japan is the best country in the world, it’s perfect!”  Hearing that has always bothered me somehow, but I never know quite what to say because I love Japan too.  I love it, but…it’s far from perfect.  I am so conflicted about it, and I felt the need to share some of the reasons why I can’t say Japan is a perfect country, or that I want to live there forever and ever. Originally I was going to write it as a huge blog, but it became a little too huge, so I’m going to post it in segments, intermingled with some more pleasant posts about Japan.

As I am not Japanese, it’s probably a lot harder to write this without receiving a bit of flack.  However, I’ve studied abroad in Japan, I have a Japanese boyfriend, and I have a lot of love for the history, culture, and language.  Maybe because I am so connected and yet still an outsider, it allows me to be a little more objective. As a second disclaimer (and one that I feel is necessary due to the responses I get when I sometimes try to have a critical discussion about Japan): yes, America has a lot of problems too, and a lot of them are similar.  I had to stop myself from typing on nearly every point I made that America has this issue too but in a different way.  That’s why it’s important to look at it critically; the details differ.  Also, yes, Japan has a lot of good things to offer as well.  No, all of this does not apply to each and every citizen, Japanese people are individuals with individual thoughts. If I thought all Japanese people believed in everything written here, I wouldn’t be dating a Japanese man, and I wouldn’t want to keep going back to Japan (then again, even if I did the food might be enough…).

Anyway, that said, one thing that really troubles me is the belief that there is no crime in Japan.

I hear this quoted from so many people, Japanese and foreigners alike.  And, in a certain sense it’s true.  There are far less cases of murder and theft.  I’ve seen change sitting on a vending machine in a neat little pile, because someone forgot their change and the next person, instead of taking the change, left it in a noticeable place in case the person came back.  There’s a reason we didn’t hear about rioting and looting after the earthquake.  Japan is great in that aspect, and if I ever write a list of things I admire about Japan, that will certainly make this list.

However, it also makes this list because I think that it’s incredibly misleading.  There is a huge problem of sexual assault in Japan.  If you’ve ever bought a phone in Japan, you’ll notice that you can’t turn the shutter sound off on your phone’s camera.  Why?  Because too many men were caught taking up-skirt shots of women and young girls.  Found this poster in Kyoto. 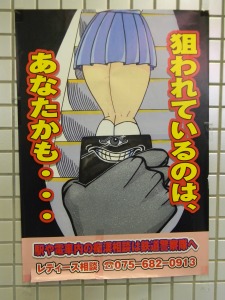 The yellow letters read, “He’s probably aiming for you.”

Many people claim how wonderful it is that people let children ride the trains alone.  If I’m ever a parent, I wouldn’t.  The train is one of the places women are sexually assaulted the most.  That is why they have women’s only cars during the busiest times – women and young girls were getting groped and no one could tell because the trains were that crowded.  You might wonder why the women don’t just speak up when it happens – but if you think that you probably have never been in a similar position, or you are extremely level-headed.

I certainly had heard enough about it that when I went to Japan I should have been smarter about it.  Many of my female Japanese friends have told me they have been assaulted at least once, some while in high school.  But, I was also told foreigners would be left alone for the most part, I had walked that road plenty of times alone in the dark before, it was a short walk to my dorm, I didn’t think I was very pretty, and I wasn’t dressed provocatively.

But I did get attacked.  You don’t have the presence of mind do anything when you’re not expecting something like that.  Maybe if it happened again I’d think and react more quickly. But when I was grabbed, my first thought was that someone was playing a joke on me – it couldn’t actually be that guy that was walking the other way, who I heard turn around after I passed him. I had figured he just forgot something. But it was him, and he followed me a short ways and then grabbed me with force from behind when I tried to unlock the gate to my dorm. Lucky for me, he didn’t take it further than that and ran away. I was left wondering if it had really just happened, with a sinking feeling in my stomach and the echoes of what he had done on my skin.

What almost surprised me more was the reactions after the fact.  I had an American friend laugh when I told her.  I had a Japanese friend ask me if it was an old guy and when I said no, she said, “well it doesn’t really matter then, does it?” With the sense of, hey, who cares, someone thought you were pretty, and you’re always saying you’re not.  It’s a compliment, get over it.  When I told one of the Japanese staff in my dorm shortly after it happened, they asked if I was okay, and when I said yes, that was that.  They closed their door, and it was never reported.  I was forced home less than a week later due to the earthquake, so I didn’t follow up on it myself.  I regret not doing so.  It’s also worth mentioning that this isn’t to say that all the Japanese people I talked to about it were so cavalier.  A couple of my friends were sad to hear about it and told me about their own experiences being assaulted when alone on a street or at a train station.  And I’m almost positive none of these were reported, either.

It takes a lot of guts to raise your hand about something like this – it’s embarrassing even though it’s not your fault.  And in a culture where you’re often taught to blend in with the crowd, it’s extremely difficult to work up the courage to do or say anything.  Even raised in a more open country, I find it hard to speak up. By the time you realize what’s happening and what you should do, and work up the courage to do it, the culprit is often gone.  Luckily I didn’t have the same experience again, but I did get verbally harassed by some men on the street a few times, and three cars on three different occasions slowed down to follow me.  One other car filled with jeering men did a u-turn in the middle of the road and flew out of there when I walked into a supermarket to get away from them, meaning their only reason for going in that direction was to harass me.

There are many reasons for this being so common, and later I will address sexism, which will reveal some of the things that I think are reasons. But for now, one thing I would like to point out is the media. From what I’ve heard, sexual assault cases are making the news more often. It’s hard for me to watch the news in Japan from America, so I can’t be sure, but I’m guessing this is for extreme cases – like the recent murder. Still, media coverage of this is a step in the right direction because it is admitting that it’s a problem. However, there are a lot of issues in the anime I’ve seen. I haven’t seen too many J-Dramas so I can’t say for sure this isn’t a problem in them, but it hasn’t been in the ones I have watched.

I think a lot of people who’ve watched anime will agree that there is often a ‘rogue’ character – in America this is often a character that seduces women with a wink and a smile. In Japan this character often assaults or harasses the women (and I’m not even going into what the ‘camera’ in anime usually does). I loved InuYasha when I was younger and I thought Miroku had his own charm – but looking back now, Miroku was pretty awful. He regularly grabs women’s behinds. And instead of presenting it as problematic, it’s responded to with ‘aww Miroku you rascal you.’ This is one example, but there are many characters that do things like this – either they grope women,  steal their underwear, peep on them while they’re bathing…sometimes these characters are presented as charming, sometimes as hopeless-but-loveable dorks, but so rarely is it ever presented as something sinister that leaves the women with a scar. I have even seen boys trying to look up girls’ skirts in anime made for children.  I’m assuming most of the people who read this understand the impact media has a population, and what message it sends to both genders about the commonality and acceptability of sexual assault.

My family has hosted some exchange students from Japan, and they have all said that they’re scared to walk outside at night in America.  For me, I felt that fear much more in Japan.  If it was night and I was walking home, I often kept my cell phone out, ready to dial my boyfriend or at least pretend I was talking to someone.  During all the girls-only talks at college in America they often told us that the perpetrators of assault and rape were much more likely to be someone you know than a stranger.  But that is not the case in Japan (though I’m sure a fair share of that happens as well – after all I’ve heard it’s hard to say that that is more common than harassment from strangers).  This is another reason why women’s rights are vitally important in Japan.  If women were respected more, maybe this would happen less.

6 thoughts on “No Crime in Japan?”