The year was 2012. Yuuki and I wanted to see the Luminarie in Kobe, famous for its beauty.

Spoiler alert: We never made it. Looking at the pictures linked to above again, yeah. We definitely didn’t make it.

This post is an amalgam of a message I wrote to a friend shortly after this night, my memories of the event, and the pictures I managed to find.

This was our story.

First of all: It was so, so cold that night. I was wearing a fancy dress I had finally convinced myself to buy from Axes Femme (a lovely but expensive store in Japan). Yuuki had a cold.

But look! We made it. Kobe, ahh! Time to see some lights! 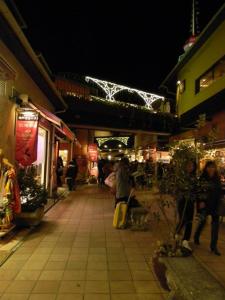 Yuuki was convinced we were already there. I had my doubts. Though pretty, this looked nothing like the pictures I had seen.

Found this in a random “American store.” Umm…

I can’t help it. I love Engrish.

Alright, so this was at least gorgeous.

As was the ship. 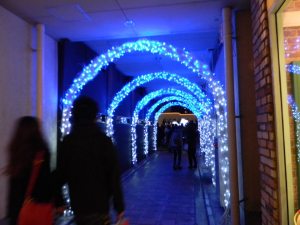 And there were couples couples everywhere. 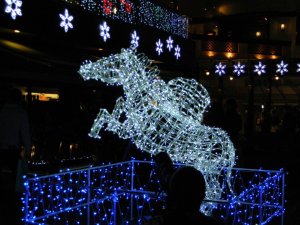 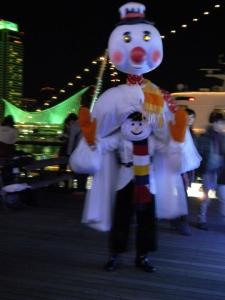 …and I guess you could call this a couple too?

As beautiful as everything was, we decided to find a bite to eat.

…after some more pictures. 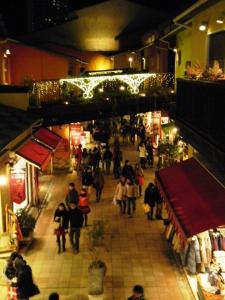 We took about 20 minutes trying to decide between an Italian, an Indian, and a Korean restaurant. In the end we picked the Italian restaurant, but they told us they only had Christmas meals, not their regular menu, all 3,500 yen and above.

(This one actually kind of grosses me out, that chicken…)

So we decided to go to the Indian restaurant. They didn’t mention anything so we assumed it was fine…and waited about 40 mins to an hour, at least that’s what it felt like. Sat down at the table…and realized they also only had three options for Christmas, about the same price.

(At least we could watch the chef cook before we found out the bad news.)

So we hurriedly and embarrasedly left after finally getting tables…and went to the Korean restaurant. 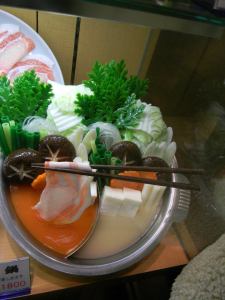 We found out they weren’t doing the Christmas only meal plan and waited about fifteen to twenty more minutes only to find out they were closing in half an hour…and our names were the last ones on the list.

So we wandered around for awhile more in the cold before finding another restaurant with decent prices. And I ordered a noodle dish and promptly dropped some on my new dress. Awesome.

We kept our humor for this first part of the misadventure, anyway. 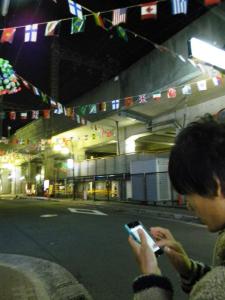 We had planned to take more pictures in the designated picture spots and maybe ride the ferris wheel….but it was sooooooo cooooooold. So instead we took some puri kura and headed towards the trains….only to take the wrong train and go farther away from Osaka rather than towards it.

By this time, it was getting pretty close to the last trains of the night. We were pretty sure we wouldn`t make it back to Hirakata so we figured while in Kyobashi we`d go to a karaoke place or something and ride the first train back. BUT once we got to Kyobashi, we literally ran from JR to Keihan and found out the last train of the night should have left 20 mins earlier. However, turns out there had been an accident and the trains were delayed. So we both looked at each other and Yuuki started to say we we’re lucky but I said stop, don’t even say that, haha. We’re not home yet. 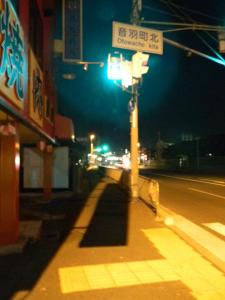 So we caught the next train, happy to be on our way to Hirakata. But the train stopped, as in, went no further than Kagashima. Which is kind of in the middle of nowhere. We also forgot to get our refund since the price to Kagashima would have been different than Hirakata. So we left the station in hopes of quickly finding a karaoke place, but the only one we found was closed. We decided to find a convini, at least in the meantime.

(I was so bored I took pictures of a bag.) We found a Lawsons and a Family Mart right next to each other and at this point there was a bit over 3 hours before the trains started running again. Trading an hour between each didn`t seem so bad…until twenty minutes later. Yuuki said he would go crazy after 3 hours of this and I was already thinking the same thing.

So we decided to follow the train tracks all the way to Hirakata. Of course, when we were in the middle of a sketchy alley Yuuki decided to tell me a ghost story. Anyway, we wandered for a long time, extremely cold and, at least I was, kind of nervous. After awhile we made it to Neyagawashi. There was an internet cafe and some karaoke places but we decided, we`ve come this far, let`s continue on.

We pressed on and there was a path where we could keep following the train tracks and go under a creepy graffitied bridge, the kind where robberies and worse always take place in movies, or go around for a bit and temporarily lose sight of the tracks…I decided it would be better to avoid the creepy possibly-controlled-by-a-troll bridge. So we pressed on, only to find out after awhile that we were going in the wrong direction. This time we decided to follow the highyway, since it pointed to Hirakata. But we were both so cold by this point we decided to stop for a little bit at a convini we had passed earlier and ask for directions. He told us just to go back to Neyagawashi. At that point we pretty much gave up and followed his suggestion. 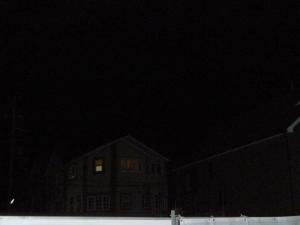 (This is one of the places Yuuki chose to tell me a ghost story.) So then it was a decision between Karaoke or Internet Cafe. I still hadn`t been to an internet cafe before, and actually Yuuki hadn`t either, so despite it being a couple hundred yen more we decided on that after ten to fifteen minutes of standing out in the cold. We went in, but of course it was not meant to be. Since I didn`t have a permanent Japanese address they wouldn`t let me buy the card to buy the time. 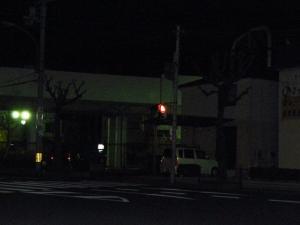 So we went to the karaoke next door, which also required a card. And while they would have let me get one, it would have ended up costing more than Jankara, where Yuuki already had a card and they didn`t care if it was only one of you. So we dragged our feet back into the cold once again to Jankara and paid 800 yen each for an hour of karaoke, where we pretty much stared at the ads on the screen blankly and drank a lot of hot cocoa. After that our ride back when the trains started up again was pretty uneventful, just still so, so cold. And we were so, so tired.

The saddest part is, this wasn’t the last time we missed the train home. But that’s a different story…

Let me know what you think of this format – first time I used it and I think it seems to work well for a sort of picture-book feel for photoblogs.

Our Christmas this year is a lot more peaceful and warm (but more than a little tinged with loneliness as we are still far from friends and family). We still do not have brilliant lights or trees. But, we tried to make do: 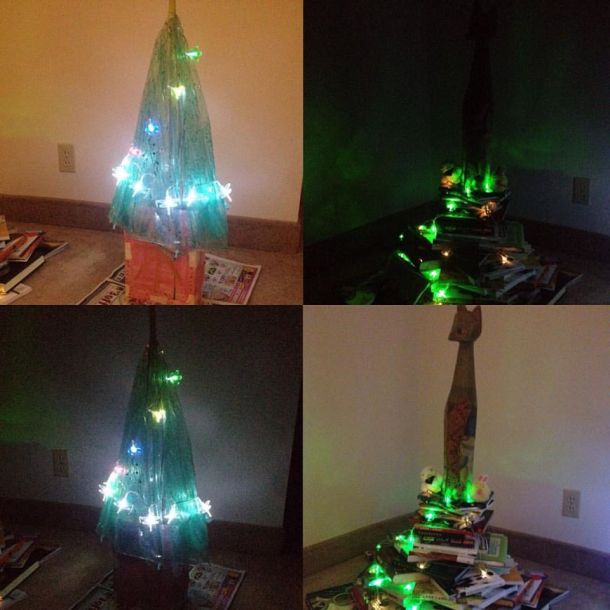 Not wanting to buy a tree this year we made two. Our first one out of a broken umbrella and watercolors. Then my mom told me a bookstore made one out of books, and I had to try for myself. It may not be pretty, but it’s…something.

Merry Christmas and Happy Holidays everyone!!