If you don’t know what Inktober is, check out the official site here! Also if you want to see Week 1, check here.

Basically I’m following the official prompts and adding my own spin on it with Japanese mythology, partially to prepare for Nanowrimo.

Without further ado, here is the artwork I made for the second week: 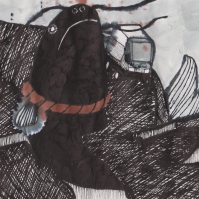 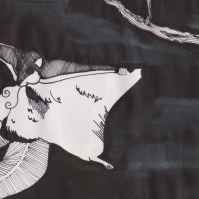 In order (now linking to a really cool website about yokai I found instead of Wiki when I can):

Lessons learned this week: after realizing I had to work smaller in order to be consistent last week, and not spend 3 days one one prompt, this week I learned that indeed, not all paper is created equal. Some of the techniques I experimented with successfully in the first week did not translate to my small sketchpad.

You need look no further than 1. Rock. Did not turn out like I hoped, with little bubbles of water holding onto the ink and creating cool patterns. Instead they just poofed out and over-saturated the paper to the point where it broke in a few places. But I did think it was kind of cool that a blob of ink accidentally fell right on top of the kanji for “kill”: “殺”.

I got set back further this week too because of NerdCon: Stories and a lack of will to scan the images, but week 3 is already over halfway done (seeing as it’s now 10/21), so look for that in the next few days! Get sneak peeks on my instagram, and don’t forget to like/ comment! じゃね！